Travis "Pale Horse" Cakos an artist and musician, living just outside of Chicago.  He was educated  at the College of DuPage in oil painting.  With his passion for art and creating invigorated he looks for more ways to play with color, light and shadow. Travis finds inspiration in many places for example; tattoo, and airbrush artists.  Other sources that inspired him are films, concept designers and illustrators.  Love for art and the wild worlds of science fiction held his imagination from early on.  Travis struggled through school but found ease at the end of a pencil drawing mostly in later years of high school. At the young age of 16 getting his first tattoo got him looking at art in a whole new way.  Watching tattoo artists and learning a few tips from them helped him make his own style blossom. With new ideas Travis takes on oil painting at College of DuPage.   He takes what he learns over two years of painting in oil and applies it to acrylics. After three years of regularly painting, Travis starts taking on clients for custom artworks.  As of summer 2014 Travis "Pale Horse" Cakos has created may works enjoyed by his patrons, friends and family.  His works have been on display in a few local shows and at a retirement home he works at.  Travis enjoys sharing his love for the arts and the way images invoke emotions through color, light, and shadow. The painting displayed here was used for album artwork.  He's also  donated artwork to his work to raise money for Wounded Warrior and Honor Flight Chicago. His donation was hung in the retirement home that he works at in honor of his veteran residents. His painting still hangs there today.

Art by Pale Horse on Etsy 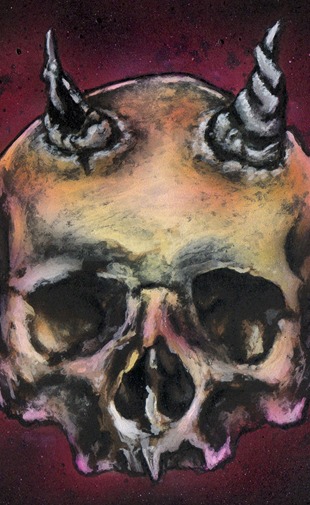